To take back Earth from the clutches of the evil, gnarled, red-with-puce-veins hands of the Draydun, the crew of Spaceship 47 will have to endure combat – a lot of it. In today’s blog post, I am outlining how the combat system works in Spaceship 47.

I wrote about turn order in this previous post. On their turn in the action phase, a player may use their action to attack with a weapon that their character is equipped with.

Each weapon (and other pieces of equipment) is on a card, which looks like this:

Let’s break down the card line by line.

The first line is the name of the weapon, in this case “Pulse Wave”.

This line is the flavour text, allowing players to get a feel of what the weapon is all about.

In the example above, the keywords line contains the word “Force”.  Keywords mainly come into play for resistances and vulnerabilities (this is discussed further down) as some characters will be better at coping with suffering from one type of weapon than others. There are other places where keywords will come into play, but today’s focus is on attacks. At the moment my list of keywords is:

This will almost certainly change over the coming weeks.

The target line specifies where (Cone 3) and what the weapon targets (everything).

Cone 3 tells the player that the weapon effect spreads out in a cone for 3 hexes. This is one of the three area effects (along with beam and burst). 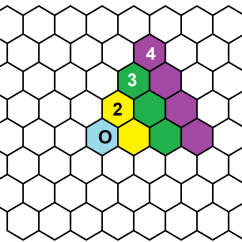 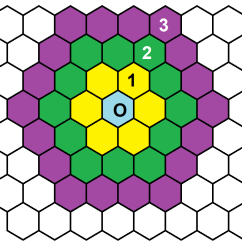 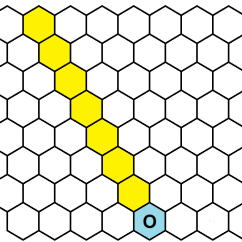 A beam is a lot simpler, pick one of the sides of the hex that your character is standing in. Continue out in a straight line from your origin hex until you hit a wall or other barrier.

As well as area of effects, the target line can also say something similar to: “One adjacent creature”. This is for melee weapons and the player chooses a creature in a hex adjacent to the one their character is in to be the subject of the attack.

There are four categories of what is affected. Everything, Creatures, Enemies and Allies.

Allies – This means that only the character’s allies will be affected. This is the character itself as well as the other Heroes and any NPCs that the player decides is their ally. At the moment there aren’t any weapons that target allies, but there are a couple of pieces of utility equipment that help boost allies.

Enemies – This means that only the character’s  enemies will be affected. This  cannot be any of the other Heroes. Any NPCs that the player decides is their enemy is also included.

Creatures – Creatures is used when an ally or enemy may be affected. Several weapons are brute force weapons that cannot discriminate between friend and foe and will target all creatures.

Everything – This includes creatures as well as any destructible object.

The actual attack will see the player roll a number of twelve-sided dice and see how many of the dice are greater than or equal to a target number to determine whether the attack succeeds.

The next few lines are a table. The headers are # which is shorthand for number of successes and Effect. The next few lines show what the effect is dependent on how many of the attacker’s dice reached or exceeded the target number. For a cone weapon which targets a number of creatures, the number of success may be different for each target as their defence values may be different. While this means that the attack may take a bit longer to resolve, it is designed to show that some creatures are better at withstanding some attacks than others.

Certain attacks mean that a Hero or an NPC suffers a condition. These are listed below:

Although many scientists have tried creating a mind control device, the sheer number of different species with different brain structures means it is impossible to create a device that controls all brains. However, you can always fry someone’s brain with unpredictable results! If you are Crazed then at the start of your movement turn roll a d12 to see the effect. If you are slightly crazed you roll 2d12 and take the lowest result. If you are mega crazed roll 2d12 and take the highest result

So there we have it, the fundamentals of attacks in Spaceship 47.