Image by David Zydd from Pixabay

The Spaceship 47 campaign will be split into 10 episodes. Each episode is a single mission that the players need to complete to gain new allies, new tech or new information in their fight against the Draydun.  As with most board games, the game itself is split into rounds. Each round is split into 30 turns, with each player allocated three of those turns. On each of those turns, the player make take a single action.

At the beginning of each round, the players discuss what they are going to do and decide at the same time what 3 actions their individual characters will take this round, allocating their turn tokens to the appropriate spaces on their player board. The spaces are shown in the example player board below and are the grey hourglasses. 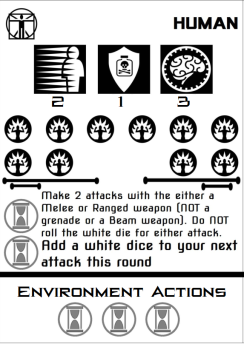 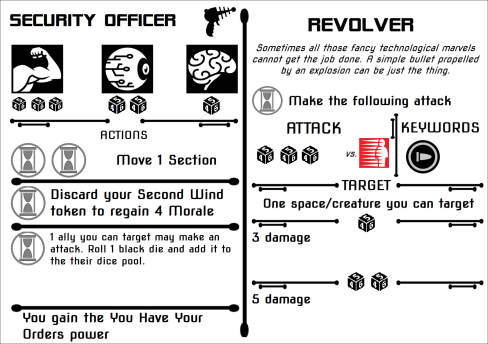 As the players progress through the campaign their choice of actions will evolve.

Each map in Spaceship 47 will have a turn tracker printed at the bottom of it. Below is a picture of the first 11 turns. The whole turn tracker has 30 columns and 3 rows on it.

As you can see from the picture, the Scout acts on Turn 1 and Turn 11. The Deadeye, turn 3; the Engineer, Turn 5; the Lawyer, Turn 7 and the Security Officer Turn 9.

The even turn numbers will be used by enemies as well as time based events specific to the mission map (for example, when force fields are active or not).

Not all 30 turns will actually be used. The odd turns (15 of them) are reserved for the players, but if fewer than 5 players are playing, then fewer turns will be used. Not all of the even turns will be used either, they are there to give me scope to add in enemies and events but which turns are taken up by these things will vary from map to map.

In the above picture, the bottom row is used to keep track of rounds. This is used when the mission is time sensitive – rescue the scientists before they are executed on round 17, retrieve the piece of technology before the station explodes, etc. This may also be used for timed events. Maybe a roof collapses on round 6, meaning the players have to move to a new map (which would look like the map they are currently on, but with a lot more debris!), or maybe a security door locks on Round 8.

The bottom row may not always keep track of rounds though. Some missions won’t be time-sensitive but have different ways of keeping the pressure on the players. For instance, if the characters have to infiltrate an enemy base, then the bottom row would track the current alarm level of the base with certain actions raising or lowering the alarm level. If the alarm level reaches a certain level then the characters would fail the mission.

When it is a player’s turn, they decide which of the remaining turn tokens to discard from their player board and they resolve that action.

As I discussed in Doing Nothing, programming actions at the start of the round may lead to players not being able to use an action due to circumstances changing (the alien they wanted to attack is out of range or dead). I need to play test to determine how often that happens and come up with some sort of mitigation if it happens too often.

What mechanic is used to resolve actions? That is the topic for the next blog post and I think is rather interesting.